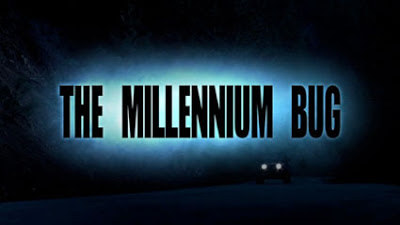 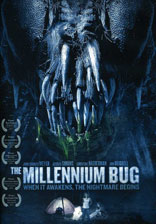 When it comes to setting up your movie, you really need to capture that audience as soon as possible. If not, you could very well fail miserably. Well call me old fashioned, but at times I really like a movie that wastes no time at all, but slams it all on during the first fifteen minutes. Inbred rednecks, city folks in a “fish out of water” scenario, a geologist investigating seismic activity in the remote woods, and the threat of a big fucking monster… Oh, did I mention the full on, spread eagle shot of a woman giving birth to a disfigured mutant baby! 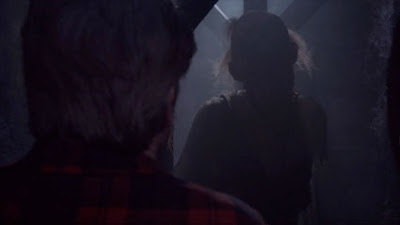 So it’s December 31, 1999… remember how we all knew some dick who thought the world was going to go up in flames, just like they thought that the world would end at the end of 2012? Well meet the Haskin family, who are taking to the roads as to avoid the possibility of any freaky Y2K apocalypse.

Director/Screenwriter Kenneth Cran moves fast, he establishes the Haskins family with ease and even manages to stick pretty generic, but effective, empathy triggers in their set up. He presents the Crawford rednecks and in the way he does it we understand that they don’t give a toss about rules and regulations. They are outlaws and do what ever the hell they want. After the credits Cran presents Patterson [Ken McFarlane], a geologist who confirms what we guessed from the initial attack -  there is something lurking underground.  All set, let’s roll. To the point and highly effective, that ever important lure to hook the audience is rammed tightly in my mouth and now he can easily reel me in. 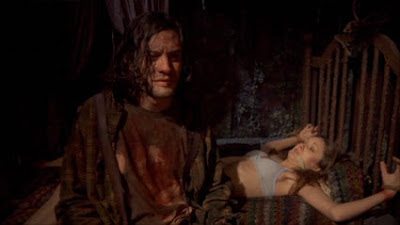 With this easy setup and establishing of characters, Cran shows us the constellation of the Haskins family – Dad Byron [Jon Bridell] daughter Clarissa [Christine Haeberman], and his new wife Joany [Jessica Simons] and with all that comes with that, as they celebrate New Year 1999. How they breath out as the world survives and turn in for the night. Camping in the woods – which we already know are riddled with things and rednecks – may be the worst idea ever, but the Haskins know nothing of pending threat and are happy to have survived the coming of a new millennium. Surprise, surprise, the inbred Crawford lads jump the tents, snatch the family and take them back to their backwoods home. Think Texas Chainsaw Massacre – complete with disfigured family members and gnarly granny, think Wrong Turn, think The Hills Have Eyes and all of those urbanites on holiday outside the city perimeter finding themselves in deep shit kind of movies. That’s how The Millennium Bug starts off, and we know where it will go. But the brains here is that Cran’s already set up the threat in the woods and intercuts the depravity – the degradation and forced wedding between Clarissa and one of the Crawford boys – against Pattinson’s exploration of the woodland underground. If the Crawford house represents the dark horror element, Patterson is the comic relief as he’s giddy as a child on Christmas with every step closer he get’s to revealing the monster. Where a normal human would have soiled their pants when a huge spiked tentacle tears their notebook apart, Patterson giggles happily. 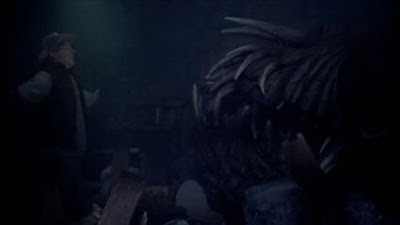 There are some wonderful moments of genre depravity here, and a great moment is when papa Haskins after being shot through the leg tries to escape only to have a dirty Crawford finger rammed into the hole in his leg and mucked about.  Great makeup, that early shot of a mutant being born which leaves nothing to the imagination, and a really, really intense and nasty scene with a shotgun where things really get tossed around guaranteed to surprise you. And that’s all without the monster making its grand entry. 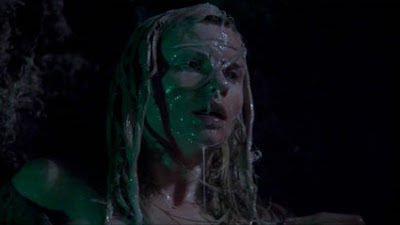 Ok, so lets talk about the monster. Apart from being something of a comic relief – although I’m not certain this was intended, but that’s how it come off – Geologist Patterson also works as a deliverer of backstory whilst the film builds to revealing that monster. Patterson is the one who knows the creatures’ origins and genesis.  He shares this insight with the audience and as he does this we see more and more of the creature… With the monster being held in the dark and underground for so long, it’s a grand reveal when you finally get to see it in all its glory. And Cran cockily uses his great monster plentiful! Once it's out of the bag, it's the star of the film and boy does it get play time. It would have been easy to climax with the reveal, but Cran brings it up from the depths almost three quarters through and uses the beast freely and as often as he can. It’s a great moment as it also shifts the focus from being about surviving the Crawford family; to an all out run for your lives no matter what side you are on monster movie. 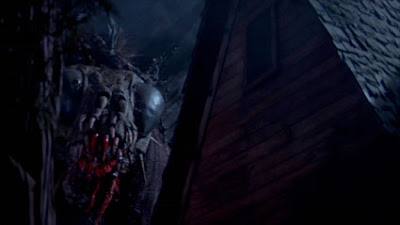 Being something of a bastard mix of a wild boar, giant butterfly and stegosaurs, the monster is the real star of The Millennium Bug. It looks fantastic and really is an impressive feat.  When it starts busting down trees and smashing up houses, Kenneth Cran is definitely tapping into beloved Kaiju territory.  If nothing else, the film is worth checking out just to see the monster and miniature model mayhem.

The only issue I really have with the film, and this is a picky detail issue, is that there are quite a few dodgy moments where it’s painfully obvious that the actors are running in front of a green screen. I know, a bogus complaint, but crap green screen is still crap green screen and considering how spiffy the rest of the flick looks it's a pity that the "running on the spot" moments had to wreck it. 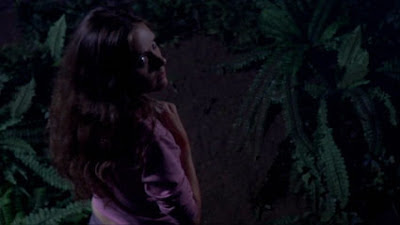 The Millennium Bug is a highly entertaining survival horror/monster movie hybrid with some fantastic old school gore, sudden shocking twists, and what just may be one of the most impressive bad-ass monsters in a long time. You really should check this one out, ‘coz this is good fun gory monster stuff.

Thanks to RUBBERMONSTERFETISHIM for thowing this flick my way!