Howlers of the Dock 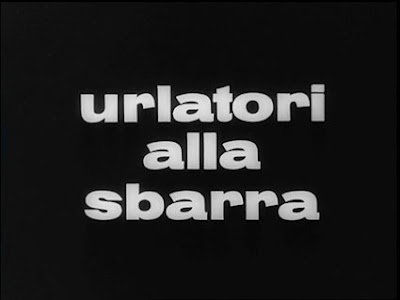 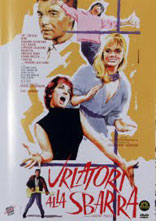 It may seem odd that Lucio Fulci, the guy most of us associate with gruesome gothic shockers of the late seventies, early eighties – or lush thrillers and Gialli of the mid sixties, late seventies, started off as a director of comedies. It may seem even stranger that he started off with a string of musical comedies, showcasing young talent breaking out in song and dance at any given moment… or is it? Well not really, as the more you learn about Lucio Fulci, the more you learn to understand his versatility and perhaps foremost, appreciate the immense talent this true master of cinema held. For example, did you know that he only ventured into filmmaking as his girlfriend of time ditched, him making him take up film studies instead of medicine instead? Did you know that not only wrote and directed a bunch of fairly successful musical comedies for Italian pop star Adriano Celentano, but also wrote a couple of his most successful songs! 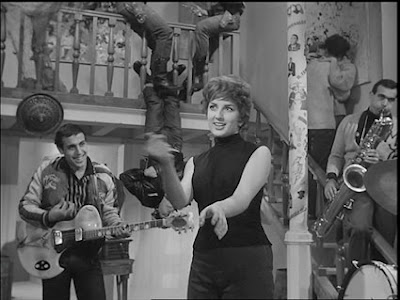 Let me put this into context for you. As a young man having left his initial passion of medicine behind and taken up studies at Centro Sperimentale di Cinematografia, Fulci graduated in 1948 and headed straight for work as an assistant in the world of cinema. Apart from assisting directors such as Max Ophüls, Marcel L’Herbier and his mentor Steno, Fulci frequently wrote art and film criticism for local papers. After a few years of working his way up, co-writing scripts, assisting second unit, shooting second unit for his mentor Steno, and comedian Totò, Lucio finally got the opportunity to direct his first feature, the comedic crime flick I ladri (The Thieves)1959. Using his connections within in the industry, he managed to get Totò to star in this debut film, and undoubtedly hoped for some of his popularity to rub off on the film, possibly generating a success similar to those earlier of Totò’s films… although this was not meant to happen. I ladri bombed and made no major imprint at all. Instead Lucio set sights on a new target audience, the youth of Italy, and what better way to captivate them but with rock’n’roll and rebellion! 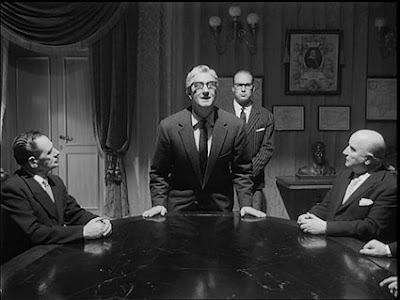 The same year of the disastrous I ladri, Fulci set pen to paper, came up with a script, stepped behind the camera once again and directed Ragazzi del Juke Box (The Jukebox Kids), a light hearted comedy with loads of swinging tunes, upcoming musicians like Celentano, and hot young talent like Elke Sommer. Ragazzi del JukeBox also starred the song Il tuo bacio è come un rock, with lyrics written by the Fulci and performed in the film by Celenato, and also featured on his debut album of the same name. On that album Fulci co-wrote the tracks Blue Jeans Rock and Nikita Rock (Blue Jeans Rock featured in Howlers of the Dock). Fulci would later write yet another track for Celentano - 24 Mila Baci, which still to this day, turns up on summer compilations in Italy. Bet you didn’t know that did you? Pretty fucking cool right! Just more reasons to love the maestro. 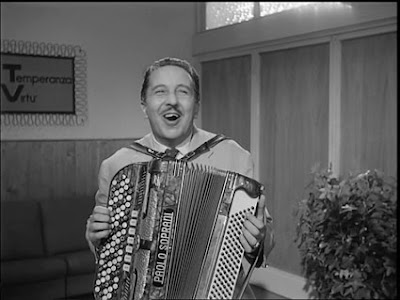 Ragazzi del Juke-Box was a decent success for Fulci and led to him teaming up with the same co-writers and talent for a second spin at the musically oriented comedy. This time Urlatori alla sbarra (Howlers of the Dock).

Howlers on the Dock uses what is kind of a typical Fulci trait, a satirical approach to politics of the time. (If it wasn’t politics, it was religion) I with no doubt in mind consider this film, despite it’s light-hearted tone to be a satire, as the government try to change something that they can not control and fail miserably… 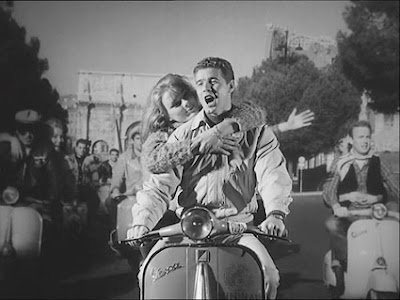 Howlers of the Dock, starts off with a board of executives demanding an investigation into how to stop and control the provocative Teddy Boys that are roaming the streets bringing a bad reputation to “The Blue Jeans Company”. Guessing that sales of Jeans will drop if associated with wild hoodlums, they try to ban the gangs and their music. After establishing what we could call the threat of the film – the banning of fun – Fulci brings on the bunch of swinging hepcats, or misfits if you will, through a bitchin’ party where both Adriano and Mina (another at the time upcoming artist) as they take turns singing a few tunes, whilst Gianni Di Venanzo’s camera circles the party showing us the who’s who of the gang. This opening sequence also introduces the peculiar – or genius – casting of Chet Baker! They sing, the dance, they goof around and do the shit that kids with a rebellious streak do.

The second main narrative focuses on a romantic tale between Guilia Giommarelli [Elke Sommer in one of her first starring roles] and Joe il Rosso [Joe Sentieri, who at the time was though of as the leading man, although in the wake of Celentano’s success to come, the film became a Celentano film and Sentieri secondary when it was reissued in later years]. 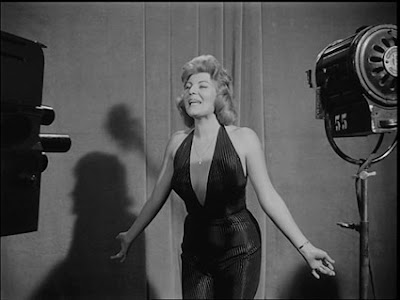 With the "adults/government" trying to ban the rocking kids, Guilia, who’s father, not only is part of the board of executives seen earlier, but also a producer of a successful variety TV show on RAI, introduces him to the gang during a party thanks to Guilia. Her motif is obviously to help make her love interest Joe a star. Here's where that great Fulci irony comes into play. Following some daughterly manipulation she persuades him to give Joe a shot on his show – Adriano get’s one too – and hey presto. Joe is showcased too millions of viewers, although his song is a safe croonery one, and Adriano’s a shit kicking Elvis inspired number. The ban is shattered, the kids win and rock’n’roll is unleashed upon the nation - state fails again. 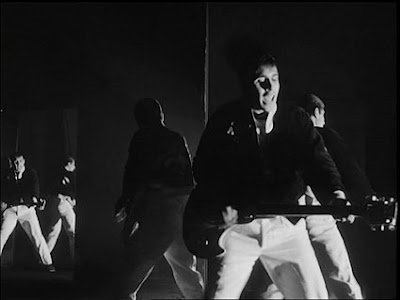 The bands of friends are more or less a comic ensemble, one guy has a Marlon Brando fetish, one dresses as Davey Crocket, another two as cowboys. The women sing, dance and flash jazz hands en masse as everyone get’s at least one number during the course of the film. One spectacular number see’s the kids racing mopeds down the streets to a backdrop of projected city images, although the highlight in my opinion is the park make out session where Chet Baker sings and plays his trumpet in the way only he can. 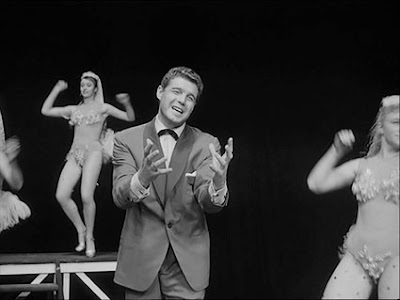 There’s not really much of the Fulci we are familiar with here, apart from the irony and satirical approach to the theme. Howlers of the Dock is very much a nice and safe musical with all the trimmings. Bursting into song and dance, strutting spastic moves and catchy tunes in Italian may not be what the gore fans of Lucio Fulci want to watch. But it’s still a decent movie and if nothing else it’s a fun time capsule. This is Lucio Fulci’s version of a Cliff Richard film or a Jerry Lewis comedy. Adriano Celentano continued to have a successful career as a singer and as an actor in Italy. Apart from his collaborations with Fulci, he also held the lead in Dario Argento’s failed satirical period piece Le cinque giornate (The Five Days of Milan) 1973. 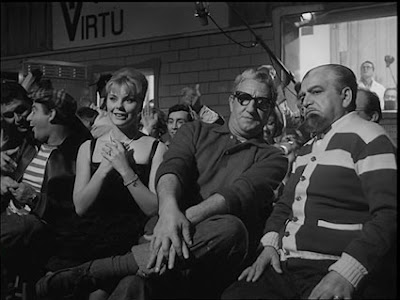 Personally  this movie is appealing to me is because of the fact that infamous bad boy of Jazz, Chet Baker, holds a part in the cast. His presence is commonly referred to as a cameo bit, but it’s much more than a cameo, he’s definitely a supporting cast member and is even credited in the titles – as Chet, the American. A few noteworthy facts/stories about Chet Baker's time in Italy are well worth sharing, such as the one that he was supposedly wasted on heroin throughout the production. Or that he was busted by the cops for heroin possession and spent a year in prison (most likely after the filming). During his time in Italy he also recorded several tracks together with the great Piero Umiliani! The film I Soliti Ignoti (Big Deal on Madonna Street) 1959 features the first appearance of their collaboration and it’s also the first Italian comedy to experiment with the use of Jazz on the score. 1961 saw the release of Smog, where Chet again is featured and is considered to be a highlight of Jazzbased soundtrack productions. Many of the tracks they made together would later surface on the albums Italian Movies, released in 1999 – something worth checking out if you dig Umiliani and/or Baker's music. Despite said to have been a wreck on set, Chet has a few small scenes where he’s present in more than a cameo appearance way, he interacts with cast, has a few lines and even manages to sing a song. Although the film primarily featured a score by Umiliani, Baker sings Umberto Bindi’s Arrividerci. This scene is also the one that closes Bruce Webber’s Chet Baker documentary Let’s Get Lost released in 1988. 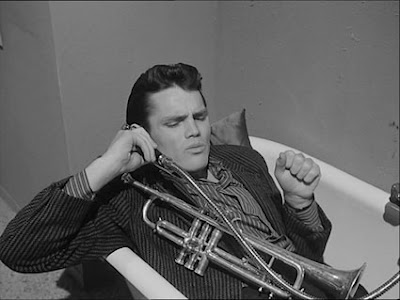 Howlers of the Dock, the third ever feature film from the master of the macabre, Lucio Fulci, is quite a novel film. I like it for it’s harmless charm, silly comedy and rather catchy soundtrack. Never the less, the film and it’s theme of revolt and satire earned it a “E” rating from the Catholic Church and nobody under 14 was admitted into cinemas screening the film. Being a fan of Umiliani’s work and a huge admirer of Chet Baker, this is an essential Fulci film for me as it sees’ three very different creative forces melding. Three forces that all stand at their polarized corners in an assortment of ways, but still housing uncanny similarities.

I’ll leave you with the song Arrividerci as sung by Chet Baker in Lucio Fulci’s musical comedy Howlers of the Dock in 1960...

...and Adriano Celentano, always the goof, singing Blue Jean Rock (with Fulci lyrics) on some TV show in the eighties.