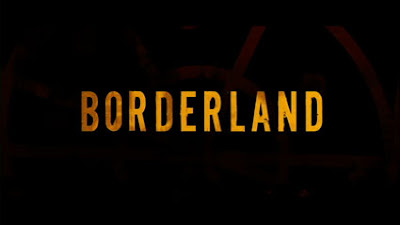 Three dopey kids with only a few weeks left before heading out to college take a road trip down south, to Mexico. In the small town of Manzanita, they just so happen to get caught up with a local cult. A cult intent on using a white man as part of their ritualistic sacrifice!

Supposedly based loosely on a real case concerning the Narcosatanicos (Why everything looks so damned much cooler in Latino spelling I’ll never know) A band of drug dealers, who performed ritual sacrifices and dabbled in the occult, left fifteen buried corpses on the Rancho Santa Elena – from then on known as Devil Ranch – thought that the magic would protect them from the police and one of them claimed to be invisible upon his arrest… Most of the fifteen bodies the police excavated from the ranch surroundings where missing brain and spine as these parts where used in the occult rituals performed. Fact always defeats fiction when it comes to bizarre stories like this one. 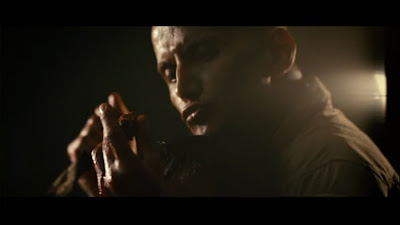 Borderland has a brilliant initial attack in its almost ten minute opening. Not only does it take us from Ordinary world into the realm of horror that we are about to be committed, but it also establishes a very potent and real threat to any protagonists presented after the prologue. Through a dark, disturbing and terrifyingly violent process, Police officer Ulises [Damián Alcázar] and his partner are captured, tortured, followed by Ulises being forced to watch whilst Gustavo [Marco Bacuzzi] and his mate slaughter Ulises partner with the warning “You go back to your cop buddies and tell them who did this”… Well if the cops, armed with weapons, and all their crime-fighting skills aren’t even safe, then how the hell are the poor kids – presented after the opening titles. From here on we also know that this is all about a Mexican occult sect with a passion for torture! Bring on the fresh meat. 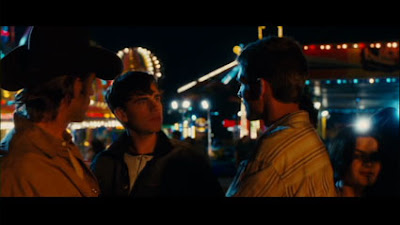 Characters are established right off the bat, dope pushing Henry [Jake Muxworthy], Phil [Rider Strong], the virgin, who only want’s to get laid and Eddie [Brian Presley] the completive one of the bunch, nursing a conscious and holding a secret from his friends - all twenty something canon fodder way to familiar for comfort, and Mexico has all the remedies they need. 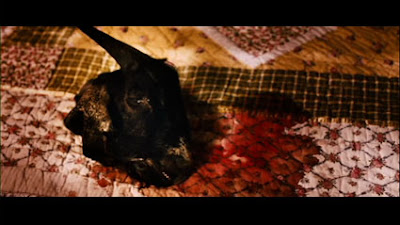 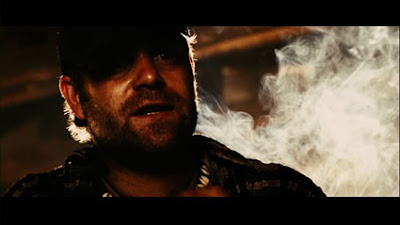 Sean Astin has a great part as Randal, a mystic and sadistic go-between, serving Santillian [Beto Cuevas] as they prepare their “gringo” sacrifice for the occult ritual.
Oh, did I mention the hot mamacitas? Forget the old toothless witches of the Mexploitation flicks of the seventies, Ed’s romantic interest Valeria [Martha Higareda] and her cousin Lupe [Francesca Guillén] are if nothing else a damned good reason to watch Borderland. Ay Caramba! 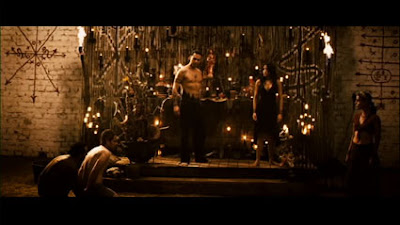 Borderland get's a four out of six possible. It hooks me straight away, builds a severe atmosphere and catches my attention, but after that impressive intro, the movie sags and more or less drags on for a good forty minutes... Luckilly the last act is a nail biter and well worth the wait.