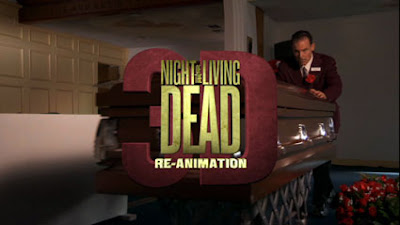 Gerald Tovar Jr. [Andrew Divoff] runs the Tovar mortuary – a character previously played by Sid Haig in Broadstreet’s previous installment Night of the Living Dead 3D 2006, although this time around the movie is a prequel and takes place a day before that previous movie… Anyways, Gerald has a problem with his mortuary, as the dead won’t stay dead. Trying his best to keep the brooding undead epidemic – by keeping it secret from his staff, Aunt Lou [Melissa Jo Bailey], Handyman Russell [Adam Chambers] and Goth-Lolita necro-crush DyeAnne [Robin Sydney], and newly employed mortician Christie Forrest [Sarah Lieving]. To complicate things even more, Gerald’s younger brother Harold Tovar [Jeffery Combs] turns up on his doorstep after a long time of absence with grudge as he feels he was mistreated in the will… in short, he want’s the money he feels entitled too. Needless to say, things get complicated and Gerald has more than one shocking surprise hidden away behind locked doors. 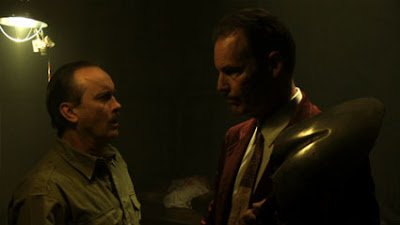 Well, they do say don’t fuck with the classics for a reason…
Andrew Divoff, Jeffery Combs, and zombies… it sounds like a horror buffs wet dream… For some it probably will be, but for me it never took off, which is a damned shame, because I really wanted this flick to kick ass!But all is not lost in the land of the dead… I’m just very picky when it comes to my zombie fun, and anything trying to hitch a ride on Romero’s groundbreaking classic or Fulci’s companion piece, rubs me the wrong way. But if you can get your head past the semi-pretentious vibe that comes with a movie sticking its self with the “Night of the Living Dead” title, there’s a pretty fun flick behind all of the façade building. 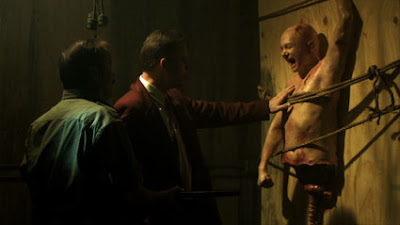 Divoff is great here, and he’s obviously giving it all he can. He manages to give a grand performance as the morally tormented Tovar – there’s a real neat shock when the reason for his keeping zombies alive concealed in there – and the way he eases the audience into his personal hell works like a charm.

I have issues with flicks that try to blend horror and comedy, sometimes for no apparent reason, but I find Night of the Living Dead 3D : Re-Animation more of a satire than a horror comedy. A satire, which makes for some laughs through the Sister Sarah [Denise Duff] character in the shape of a  Sarah Palin parody. This despite fucking up the time line… I was under the impression that this movie was a prequel to a movie that was made in the sixties and supposedly took place then too, not four decades later… 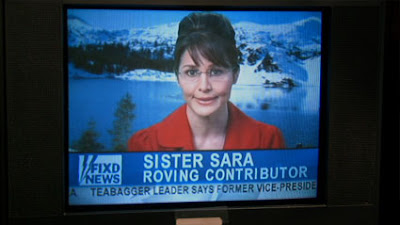 Despite being something of a slow mover– with the obligatory zombie beat every few minutes – I really liked the rift between the brothers and the reveal of the exploitative idea of Tissue Farming… But Gerald is all about family values and stopping at nothing to keep his fathers work in prime focus. There’s some great dimension to the character that Divoff presents. Combs get’s the job done, but not really much more, and despite a sudden plot curve, they still manage o kick in a shock twist at the very end of the flick. 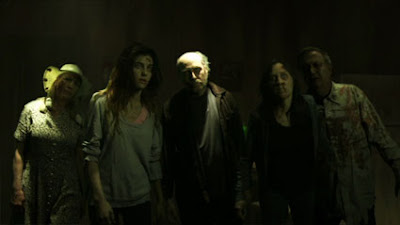 Night of the Living Dead 3D: Re-Animation just about get’s a three out of six possible. The reason for this is that I don’t really feel that it’s either creepy enough or funny enough, although still enjoyable… it almost feels like a TV show... I don’t really know what they want with the movie, and I would have given the digital effects a second spin. When it comes to zombie horror I prefer the old school approach to special effects over CGI (sorry Fred), and when you have a movie set in a morgue, why not go all in with a classic gut spill? Although on the plus side, I’m sure this movie is a blast in it’s 3D version, as that’s what the movie primarily is made as, a 3D horror shock!

That "gives" a great Sarah Palin imitation? Not one for proper grammar are you. If it's the same Sarah Palin spoof that's on the trailer, it's actually quite pad and doesn't sound anything like Palin! Why would a piece of crap like this do anything to alienate any portion of it's already near nonexistent audience? Would it be funny if Tovar had a chimp called 'Obonzo'? I think that's funny myself!

Yeah. I guess you are right there... the grammar sucks and the imitation is nowhere near fantastic...

Most of these pieces are mostly written in the spur of the moment, and grammar get's sloppy at times then. Especially on movies I don't expect anyone to visit.

Anyway, thanks for pointing it out, as I now feel the need to go back and change that passage... I guess the novelty of seeing that similar "Palin" gag in Iron Sky around the same time made me feel that the imitations where more than they really where... they are probably more meant to be "likenesses" than imitations.