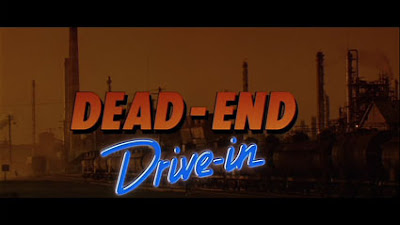 Australian Post-Apocalyptic cheapie, that tells the tale of Crabs [Ned Manning], who takes his girlfriend Carmen [Natalie McCurry] to the Star Drive-In only to have the wheels of the car, a car he borrowed of his mate Frank, stolen. With the tires stolen, Crabs and Carmen find themselves trapped inside the drive in, which has been closed by the government to detain the restless delinquents within and keep them off the roads. Inside the electrified walls of the drive-in, a whole society has been erected… and held captive in this world where government control – as in feeding the kids drugs, bad movies and keeping the Sheila’s on the pill – Crabs starts desperately searching for a way out! 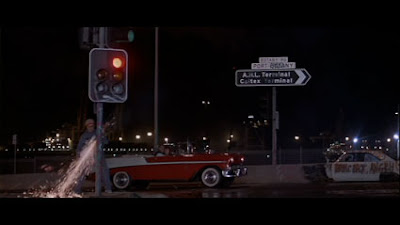 Because low-budget Ozploitation flicks are fucking brilliant, kicks convention ass, and Brian Trenchard-Smith was one of the greatest directors of the niche. Yes, a man with the motto “When in doubt blow it up, or at least set fire to it!” or “Fire is cheap, and gives high production value!” is a goddamned hero in my book.

Contemporary Aussie Rock Music, sinister delinquents, floozy chicks, a record breaking car stunt, climactic shootout and the most terrifying thing of the future…punks – think about it, people must have been scared shitless of punks in the eighties, as almost every goddamned post apocalyptic flick has mohawked punks in leather and boots as the thug villains of the waste lands. Although the real fear is presented in a smart piece of social commentary concerning racism. Which also works as a motivator for the community now faced with the dilemma, where The Star Drive-In once was a safe heaven free from “rice gobblers”, there’s a growing problem now that there’s non-white’s as part of the community. An intelligent reflection on Australian society in the late seventies, early eighties. See, exploitation films aren’t all about tits, ass and violence; they also want to say something. 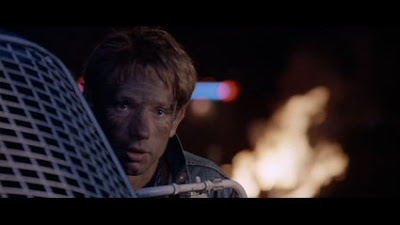 Any movie with a 'Rambo 8' gag is worth the time watching, and inside the drive-in Escape 2000 (aka Turkey Shoot) 1982, and The Man From Hong Kong (aka Dragon Files) 1975, are screened. Both of them Trenchard-Smith flicks, and both movies that Carmen can’t take her eyes off… “I’ve got to see how it ends!” I love the balls of writing a scene like that into your movie, a scene, which shows just how damned great Trenchard Smith really was.

Where everyone else is seemingly content with being captive in the Drive-in, Crabs becomes a natural protagonist as he’s consistently trying to create change, i.e. get the hell out of the drive in controlled by Thompson. There’s a great tension that builds between Crabs and Carmen, as she becomes more and more adaptive to life within the fences, where Crabs becomes more and more determined to get the hell out. 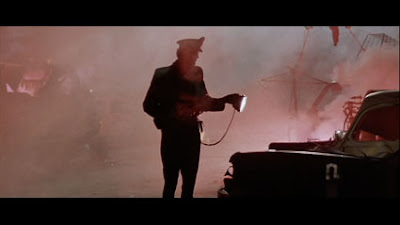 Written by Peter Carey who you should recognize as the writer of another great Ozploitation classic, the deep dark comedy Bliss 1985, and one of the writers on Wim Wenders Until the End of the World 1991

Despite being something of a failure at the box office – but it did find it’s audience on the cult circuits later albeit the cultural elitists – the movie was nominated for a Australian Film Institute Award for Lawrence Eastwood’s production design. And I'll be damned if there isn't a drinking game somewhere in all that graffiti and detail in frame. 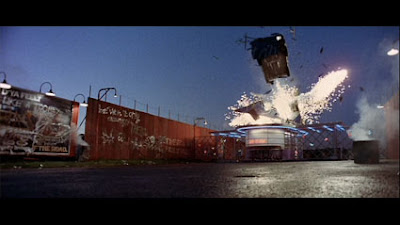 Dead End Drive-In get’s a four out of six as it’s a damned neat little movie. Yes it’s slow and tediously works it’s way towards the action packed climax for almost eighty minutes. But that’s part of the charm with certain cheap exploitation flicks, they are quite meditative and half the challenge is trying to keep awake whist watching them. Oh, and the Anchor Bay version has a great commentary track by Trenchard-Smith who is always entertaining to hear talk shop.

This is a great movie! I have a Denmarsk VHS but I guess I ought to upgrade if nothing else to hear the audio. xD