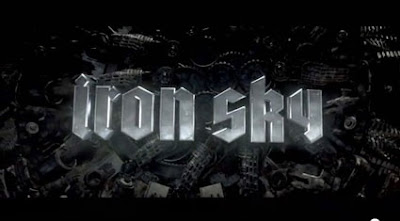 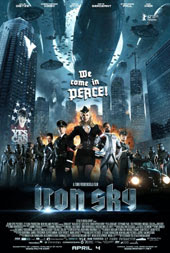 IRON SKY
Directed by: Timo Vuorensola
Finland, Germany, Australia, 2012
Sci-fi/Comedy/Drama, 93 min
In a near future, 2018 to be precise, an American venture to the moon stumbles over a secret that’s been lurking on the dark side of the moon for seventy years! After their defeat during the second world war, the Third Reich have been hiding out of sight on the back of the moon. There they have been tending to their wounds, licking their sores and preparing to rise again. Now regrouped, restructured and full of faith, The Fourth Reich is ready to reclaim their earth! 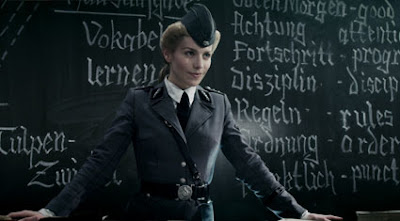 I really got a kick out of Iron Sky, and it’s already on my list of movies that I need to see again! Unlike the so-so curiosity it could have been, it’s a Wagnerian blitzkrieg, taking its public on a captivating ride through action, lust, love, power and greed, but still managing to deliver a message to its audience. 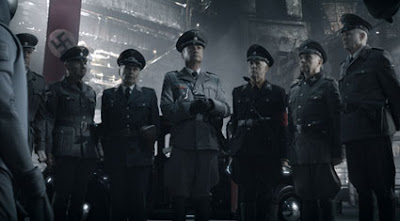 Characters are presented in a straight and stern manner, polarizing good guys from bad guys. The Nazis come with their historic luggage and you get the badass vibe from their strict and futuristic storm trooper suits already in the first four minutes. The use of Nazis in any form is a great move, as this does two things in the blink of an eye.
One: you need not waste time on backstory – we all know that the Nazis where amongst the evilest form - take a look at Mike Mignola’s early Hellboy comics or even the first Guillermo Del Toro movie of the same comic, Kroenen and Ilsa Hauptstein don't just look awesome, we know from the word go that he's gonna be a bad ass, because they are Nazis! Look at Michael Mann’s The Keep 1983, or even read the original source – superior to the movie – written by F. Paul Wilson in 1981, Ken Weiderhorn’s Shock Waves 1977 or even contemporary stuff like Steve Barker's Outpost 2008… you get the jest, no need for backstory, just get right in there and let the Nazis stir shit up.
Two: you present a threat that comes with all the trimmings in one go. There’s no need to explain what they are, their genesis or even set rules for the antagonist. They are Nazis it doesn’t get any easier. Adding the pizazz of Nazis hiding behind the moon for seventy years is just sheer genius on the behalf of originators Johanna Sinisalo, Jarmo Puskala and screenwriter Michael Kalesniko. Not forgetting director Timo Vuorensola for bringing it all to life. 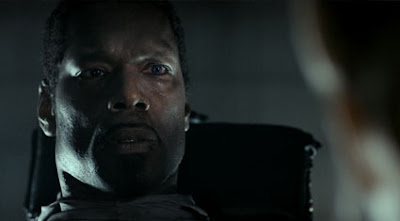 The Stormtroopers are led by Führer to be Klaus Adler [Götz Otto], also introduced in the first few minutes, hell, even the Führer himself Wolfgang Kortzfleich [the majestic and iconic Udo Kier] is posed against the heroic character James Washington [Christopher Kirby] immediately after the bombastic opening titles with their hard electronic Laibach score. Which leads us to the main character of the piece Renate Richter [Julia Dietze] Richter is presented in a fashion that shows the audience the conscious and determined brainwashing of both her, and the generation of Nazi youth that she educates in her work as school teacher. In her world the message of the fourth Reich is Love and understanding. To such a degree that when she show’s her students “Chaplin’s most famous short movie” it’s The Great Dictator 1940, cut down to a ten minute shape, only showing the dictator at his happiest and most peaceful, like playing with the globe balloon… It’s a smart and intelligent way of explaining what has been going on and the indoctrination taking place on the back of the moon for the last seventy years. 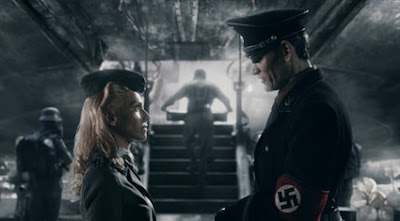 This all changes when the Space Nazis are forced down to earth to take part of new technology. Captured Astronaut Washington’s modern day cell phone manages to bring a spark of life into the Götterdämmerung – the largest of all the spaceships hidden in the darkness of the moon. Alder see’s his chance to side step the current leader and take his rightful place as Führer through a daring mission to earth to find more “computer plates” as to prepare the invasion. With the aid of Washington they take off for earth and upon arrival realize that Renate has snuck on-board the spaceship… time for culture crash, and moral awakening. 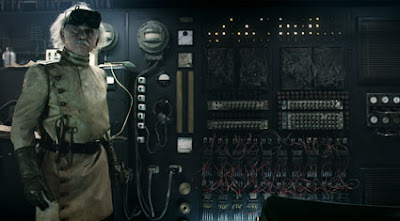 The Nazi’s become the focus of Vivian Wagner [Peta Sergeant] a razor sharp, no bull public relations advisor to the President of the United States of America [Stephanie Paul] – an obvious Sarah Palin gag. With the attention comes hubris, and Renate soon has a terribly rude awakening, whilst Adler, who in his turn has been playing Wagner for his own needs, slowly moves towards his plan of becoming Führer and invading earth.
Despite all the intrigue, action sequences, space battles and ironic comments, Iron Sky still manages to deliver a biting satire over the US, and other leading countries exploitation of new sources, and the greed that comes with it. In Iron Sky the object of desire is Helium 3, and despite claiming that sending an African-American to the moon will help popularize the residing female president, it’s the Helium 3 they are really after. It’s a great move to have the female president cheer as she realizes that going to war always guarantees a second period of presidency, and a comedic moment which is way to close to reality to really be laughed at. 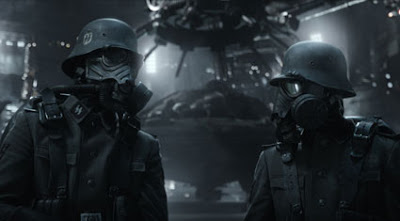 What surprised me the most with the movie, is that when you look at the heart of Iron Sky, you find a quite tender, but at the same time gloomy, tale of morale! If there’s a message to take with you after a viewing it’s that revenge is messy and only leads to further violence. Violence of the most nihilistic kind of way, Because notwithstanding the laughs that have been obtained during the ninety minutes of Iron Sky, and despite the clear polarization of Nazis versus so called good guys, there’s a stern finger pointed at us the citizens of modern age… a warning is given much more threatening than Space Wehrmacht hiding behind the moon! 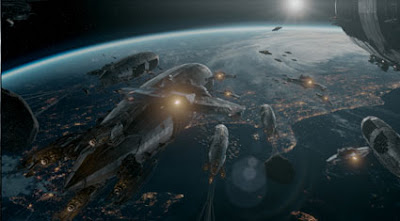 But the road there is hilarious. It’s Mars Attacks 1996 versus Where Eagles Dare 1968 seen through a filter of Steam Punk, live action Animation and the films of Jeunet and Caro, coming out in a result which is undoubtedly the most kick ass Space Nazi invasion film ever made!
When Iron Sky hit’s home video I challenge you all to a movie referent drinking game, because it’s loaded with them. Heck there’s even a gag where that viral “Hitler get’s angry” scene from Oliver Hirshbiegel’s Der Untergang (Downfall 2004 – in which Götz Otto had a part), is mimicked. Working that gag in there is hilarious, and one of many great laughs. 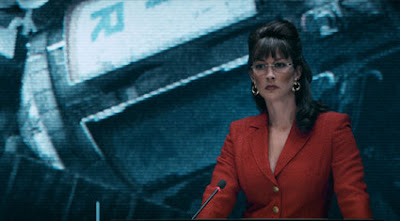 I recall hearing about Iron Sky back in the early 2000’s when Richard Raphoorst’s eagery awaited fan financed project Worst Case Scenario folded and went down in flames. Just like that one, I was never expecting to really see Iron Sky, despite my mates coming back from Cannes with great stories of Nazi clothed hostesses promoting the movie at some of the greatest parties they’d been to. But never the less, it's here and it's a fact, Iron Sky is a winner; it looks amazing and was definitely worth the semi decade wait! Iron Sky is the hidden behind the moon movie of the decade and The Götterdämmerung puts those god-awful Cybertronian pieces of shit from that “Makes-no-sense” Michael Bay flick from last year to real shame!
Heil Iron Sky!
- March 25, 2012

It's unbelievable how they made it happen with such resources.

I beats many movies that are made with better fund and less soul.

Thanx dude!
I'll check that out. Although it's a blog and sometimes things move fast when I finally get around to posting.

But never the less, thanks.

Thanx dude!
I'll check that out. Although it's a blog and sometimes things move fast when I finally get around to posting.

But never the less, thanks.

Through the twisted scientific process of 'I look for favourable reviews until my nose bleeds so I can quote a positive reason for taking the wife out to see it' I have decided that your review of my years long anticipated film is the best. Congratulations are indeed called for. I say you deserve a bottle of Liebfraumilch or even something good in it's place. Previous commentors may note the appropriate possessive pronoun in use. I truly hope we can enjoy this film in the U.S. on the silver screen, as it was intended to be viewed. If I have to watch it over the Internet on my computer-plate enhanced portable telephone if there Are moon-Nazis or forgotten cosmonauts up there they will hear my scream.

+ one internet to the reviewer because this review is as good as the movie it reviews:-)

Thanks Anonymous and Sonko!
Hope you like it as much as I did.