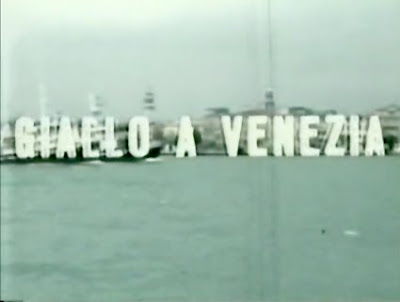 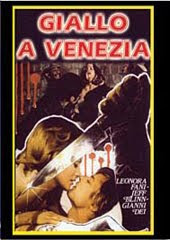 
With an infamous reputation of being one of the sleaziest of all the Gialli, one expects a lot from Mario Landi’s Giallo in Venice. Indeed it is a rather grim and gritty piece of work, but at the same time it’s suffers quite a lot from a whole lot of problems, and there’s a very determined feeling that Landi was merely out to quickly create a series of sensationalistic vignettes instead of making a decision of what foot to stand on. Which makes up for a very peculiar, seedy and mediocre movie. 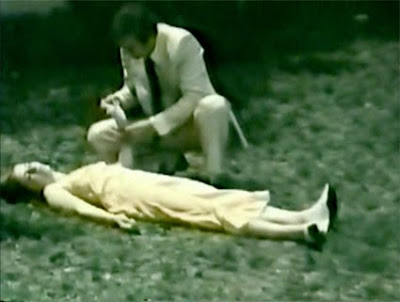 With an opening sequence that will slap any sleepy viewer awake, we witness the stabbing of Fabio [Gianni Dei – who also starred in Landi’s Patrick vive ancora (Patrick is still alive) 1980]. He’s repeatedly and violently hacked in the groin, he screams and writhes in agony before a cut to a woman in the waters, then a third cut to a man waking up with a jerk as if from a nightmare… Cue the opening credits and Berto Pisano’s pretty decent theme score, and the movie get’s a going. Detective DePaul [Jeff Blynn] can’t put his finger on the case he’s been assigned too. In the harbour they have found a man stabbed to death and next to him a drowned woman… he can’t put it together for the life of him, which obviously takes him to investigate the friends of the victims, the feisty Marzia [Mariangela Giordano] - who you all know and love as the unfortunate mother of Peter Bark in Bianchi's Le notti del terrore (Burial Ground) 1981. 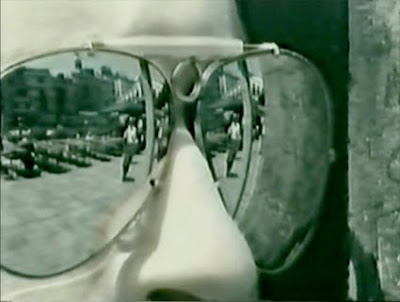 Through a series of flashbacks Marzia starts to tell the tale of how her best friend Flavia [Leonora Fani] got involved with Fabio [Dei] and how he started forcing her into acts of sexual exhibitionism. At the same time there’s the killings and the shady character that is making threatening hone calls to Marzia. So the sexploitation thread is set in motion as well as the gialloesque one too. But that’s when it all starts going terribly wrong. The sexploitation parts of Giallo in Venice are pretty friggin tedious, they go on for far to long and to top it all off, the music used in the scenes to show how what a degenerated slob Fabio is – as he violates and forces Flavia on to other men – is completely wrong. It’s an upbeat quirky tune that almost brings a comical tone to the movie. It’s pretty bad, and really has no eroticism to it what so ever. Actually it’s shot so bad, that it’s almost not even sleazy, just sloppy. 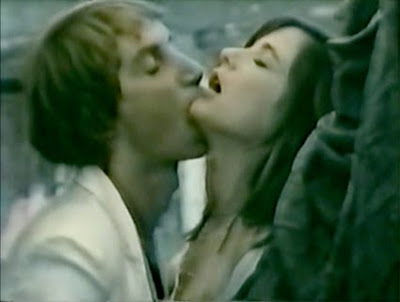 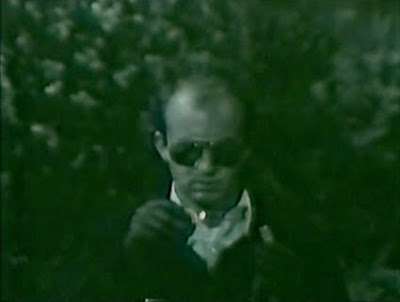 But where the sexploitation movie part does absolutely nothing for me, I’m somewhat intrigued by the Gialli part of the movie, as it does actually have some pretty good scenes. Plot wise it’s pretty shallow, but it does go by the book and lays out a decent track that eventually reaches it’s destination – reveal central – where the killer is exposed and a last spin is put on the story. It has to be said that the killer has some splendid moments, and where the movie has its fair share scenes of musky sleaziness it‘s equally grim and sadistic in it’s murders. It’s also in the Giallo scenes that you will see some of the better of Franco Villa’s better cinematography on this specific film, half the time he's obviously bored out if his mind and didn't even try to compose something above average. It’s an interesting approach to use quite long chucks of flashback to drive the plot forth (if you really can call it plot) as the non-linear approach of the movie actually works in it’s benefit, and gives Landi an effective way to solve he murders at the very end of the film when he chucks that last spin at us, and it’s pretty amusing that the three key elements to the puzzle that DePaul can’t put his finger on are the first images shown in the movie, but that piece doesn’t fall into place until the very end of the flick. 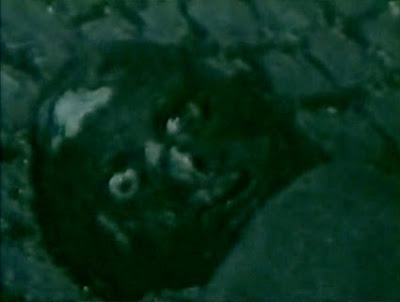 But what really makes the movie such a dull movie story wise is that old classic mistake of shallow or nonexistent characters… There’s absolutely no likeable characters in this move what so ever. Not one. So it’s a difficult movie to actually get into and invest emotionally in anyone. Which could have been done easily with the character of either Flavia or Marzia, but not. There’s not really any real interest in wanting DePaul to solve the case either, because as far as leading men go he’s a right mess. He’s constantly eating boiled eggs, strutting around in his white slacks and scruffy hairdo dropping cynical comments and completely unfitting remarks to everyone. He doesn’t even have that dark background that many other complex cops have, he’s simply a clown who we have problems taking to. 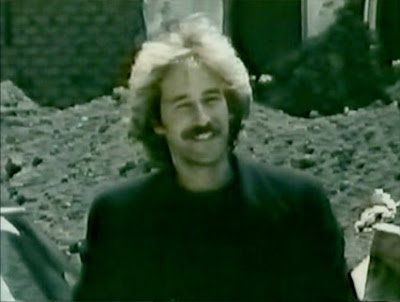 Giallo in Venice is indeed a sleazy and violent flick, but it’s also a both production wise and story wise a pretty poor achievement. I was definitely expecting more sleaze and death than the actually quite few key scenes of the movie, all that go on for far too long and actually end up becoming tedious. Yes, there are a couple of notable scenes of violence, which not only are misogynistic assaults on women – even though there are two pretty hefty such scenes – but also a rather grim murder of a male character that rarely get’s mentioned in reviews. It’s not really fair to compare movies, but put side by side to Lucio Fulci’s magnificent tour de force Lo Squartatore di New York (The New York Ripper) 1982 which came out three years later, Mario Landi’s Giallo in Venice painfully stands as a testament to the fact that Landi obviously was uninterested in what he was doing here. There’s a potency to the movie that would have made a really classic piece if only he’d had paid more attention to the details. 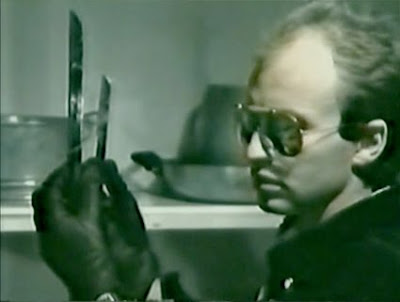 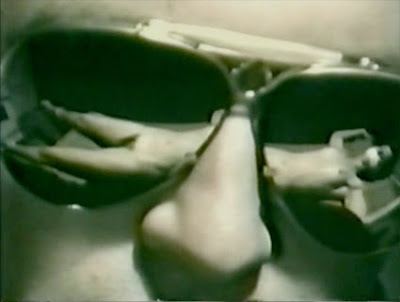 Producer Gabriele Crisanti – who made an impressive run of sleazy sexploitation flicks with actress Mariangela Giordano in key parts may not have made a very memorable movie with this one, but he’d certainly make a larger impression two years later when he produced Andrea Bianchi’s zombie monstrosity Le notti del terrore (Burial Ground) 1981. 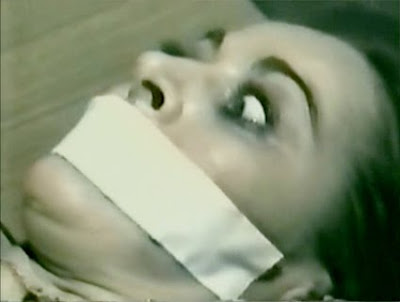 Mario Landi’s Giallo a Venezia can be obtained on bootleg DVD-R from here or here. 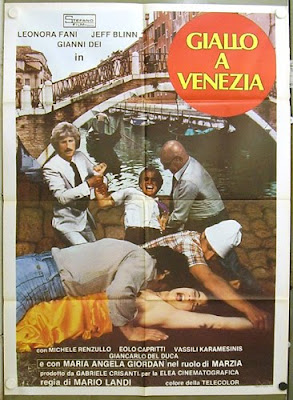 Respect for featuring this film!
I never expected anything from it, all Crisanti-produced films are the same commercial trash with no ambition whatsoever.
My copy is in the same poor condition is yours.
Completely agree on nonexistent story, but most sex films are like that.
Pisano score probably drifted in from an older and better picture.

Yeah I felt really fucking annoyed because it's one of those that I've heard so much about for so many years and when I finally see it it's pretty terrible... shouldn't come as a surprise really but there you go.

The music most likely was lifted off a previous movie, and I think that there's parts of it in Bianchi's Burial Ground too...

To be honest, for me this is the worst giallo I've ever seen :) I might be taking another look at it if it turns up with good quality, but if not... never again :)