The Sidewalks of Bangkok 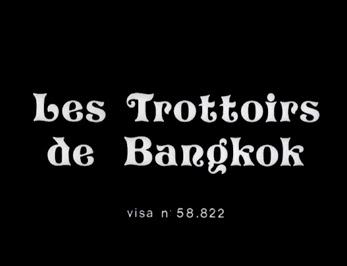 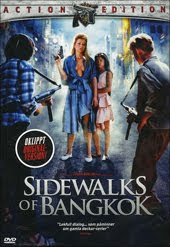 There’s quite a lot been said and written about Jean Rollin’s The Sidewalks of Bangkok and there are just as many opinions about it. Some favour it because it, for Rollin standards, holds a pretty fast and furious beat to it. Others feel that it’s a bastard child which sticks out to much compared to his more reserved and sombre poetic works. 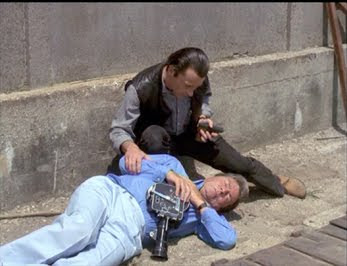 Supposedly Rollin wrote the script to The Sidewalks of Bangkok in three days with the intention of making a movie that paid homage to good old cliffhanger serials and MGM’s 1932 classic The Mask of Fu Manchu with Boris Karloff in the lead role. And if the three-day script writing session is true, then it has to be said that he made a pretty damned good job of it. Much like the later film Perdues dans New York (Lost in New York) 1989, The Sidewalks of Bangkok was crafted around footage that was shot at a different occasion. This time by producer Lionel Wallman on his honeymoon in Bangkok - Wallman had previously produced Rollin’s Lèvres de sang (Lips of Blood) 1975 and Les démoniaques (Demoniacs) 1974. The footage was given to Rollin with the suggestion that it could be worked into a movie, and damned right too, as the handful of inserts work like a charm in selling the illusion that part of the action in the movie takes place in Thailand. 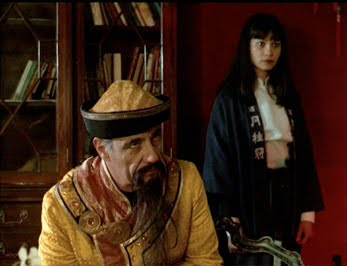 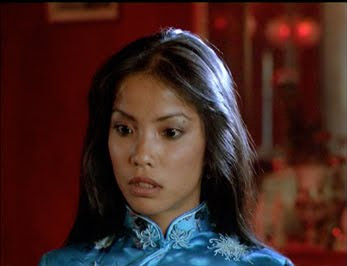 Getting off with a riveting start - secret agent Rick is shot down in the middle of an assignment triggering a race for the secret chemical weapon that he supposedly held in his possession... and that secret weapon leads straight to Eva [Yoko]. With that said, several counterparts take off on the chase for the desired weapon of mass destruction, which they will find if they find Eva – there’s Rick's officials who want the weapon brought back to them, and there’s the sinister terrorists lead by Rita [Birgitte Borghese also seen in Rollin’s Tout le monde il en a deuz (aka Bacchanales sexuelles) 1974] who also want to lay their hands on the deadly potion. So the race is on to find Eva and then seize the veil of chemicals and gain world domination. And poor Eva is stuck in the middle with nothing but her love for Rick to hang onto. 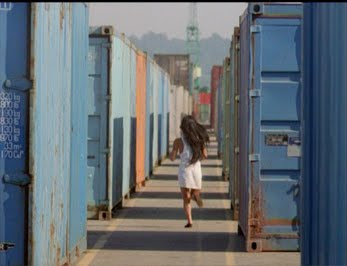 In all honesty The Sidewalks of Bangkok, is a pretty neat little action flick. Rollin really makes the most of it and it’s fairly easy to see where the cliffhanger serials have influenced the plot. You have to take it for what it is, a cheap entertainment flick within the action genre with a sprinkle of light sleaze and a high tempo. And this is probably what many Rollin fan’s enjoy or unlike about this one, as the movie is in constant motion, never really stopping for a second - unless to linger on a naked disco dance, unexpected female mud wrestling or an erotic massage. But apart from those incidents it’s a well paced hide and seek-a-go-go ride that is more or less a complete antithesis of the usual meditative and poetic Rollin flick. 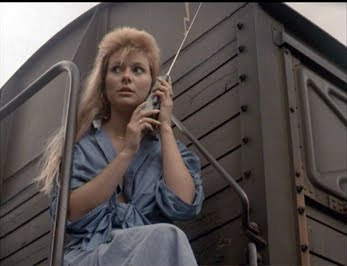 The Fu Manchu inspiration is obviously the Asian seasoning, the frantic chase and hunt for the objective plot, but also the almost cartoonish caricature of Jean-Paul Bride’s Tong – who even looks like a Fu Manchu clone. Yeah it’s cheesy, but at the same time it’s a rather fitting as it automatically brings all the evil of the archetype Fu Manchu that we have seen previously in other movies to the table. It’s an effective way to get your villain into the context without wasting too much time explaining the ins and outs of this persona. That’s why Vampires, Werewolves and Zombies still work in contemporary movies today – they are part of popular culture and filmmakers don’t have to set up the rules over and over again each time. 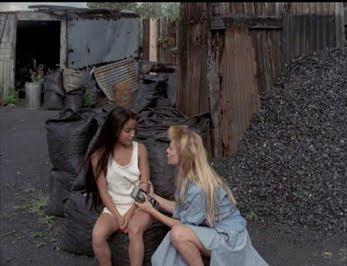 But Fu Manchu, or rather Tong, isn’t’ the main antagonistic force at large here, he’s more of a secondary character as the main struggle is between good, represented by the agency - and evil, embodied by Rita, the professional hit woman Claudine [Françoise Blanchard – from Rollin’s La morte vivante (The Living Dead Girl) 1982] and her two butchy thugs. These are the forces that are after Eva, and they are forces that will stop at nothing to lay their hands on the secret formula she supposedly possesses even if it takes them on a journey around the world. And it there in this age-old battle between good and evil that one finds the values that make this an interesting movie. Luckily the movie has the fascinating character of Claudine, the professional assassin who has a surprising change of heart as the chase for Eva comes to its climax. It’s a great character arc that usually is missing in low budget exploitation cinema where character commonly are polarised for a very obvious reason. I could imagine that this is also where the early short episode serials have been an inspiration, as these also saw a constant change in character loyalties and values, and that each overcome obstacle is instantly exchanged for a new larger obstacle. 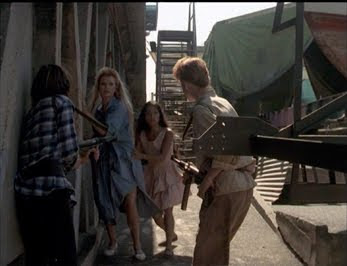 It’s no wonder that Rollin is very fond of the movie and obviously had a euphoric time on set – not only was he surrounded by several of his friends and regular actors and completely blow away by the dedication relatively newcomer Yoko brought to the piece, but also because many of the key scenes where shot guerrilla style with out permits or bureaucracy interfering – something that certainly mimic’s the filmmaking fashion of those early movies. Or it could quite possibly be simply because the movie starts with a bursting close-up of him playing the killer who puts a slug in Rick and metaphorically gets the plot started. 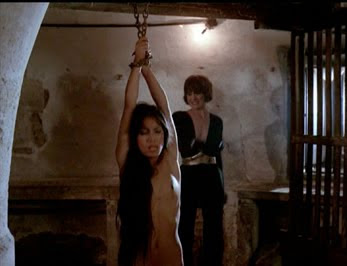 But before we all agree that this is a movie that stands out amongst like the hyperactive child in Rollin’s catalogue I have to point out that it’s mechanics are the same devices that Rollin almost always used in his movies. If you have read any of my previous posts on Rollin and his movies you will know that I have a very determined theory on what Rollin’s movies are all about.
The themes – being lost, the search and love – are apparent even in The Sidewalks of Bangkok in ways that make up a classic Rollin narrative. It works in two levels, first there’s the obvious, all characters are searching for Eva and the chemicals... but then there’s the one that lies closer to Rollin’s heart of all his themes. The lost love theme. Yeah lost love. Eva is living in Bangkok, hanging on to that little thread of a promise made by Rick that he’ll come back for her one day. And this is what both sides use in the conquest for Eva, which is why Claudine wins Eva's trust when she proclaims that Rick sent her to fetch her. It’s also the same search for Rick that drives Eva in the last half of the movie, the reason she let’s the skipper on the boat take advantage of her, the same reason she leaps from the boat and swims to the harbour despite warning of the dangers, the same reason that she puts her trust in Claudine, the same reason that she breaks free from the grasp of Rita, the same reason that she puts a slug in the mastermind behind the whole scheme presented in the surprise end twist. The main driving force of the Jean Rollin universe is the search for lost love, and as you see it’s even quite apparent in The Sidewalks of Bangkok. 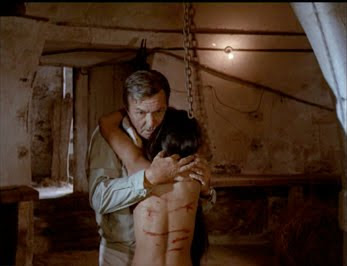 So to sum it up, The Sidewalks of Bangkok may indeed be one of Rollin’s most successful movies because it dares to walk outside his common visual milieu - it may very well be one of his most action packed and best paced movies. But at the same time it lacks that poetic imagery that many of the other movies hold, the visual magic that we associate with a Rollin film. Although this is not an obstacle for The Sidewalks of Bangkok, but rather a relief as it takes on it’s own life within the canon of Rollin’s output. There’s not really any logic space within the movie for the enigmatic imagery of the other movies, although there is a pretty lengthy sequence that takes place at a train station. This one is all about pushing the envelope further and speeding ahead in an almost ironic intrigue and cartoon plot twists that take the characters on a trip all over the word and into a multiple of varied settings. It makes for a very entertaining little piece that shows that there’s more to Jean Rollin than transparent satin nightwear, female vampires and the beaches of Dieppe. It’s a splendid movie that shouldn’t be taken on the same level of seriousness as his other great pieces, but at the same time shouldn’t be shrugged away as a bastard offspring outside the EuroGoth realm. It’s a fun and tantalising journey that plays ironically and jokingly with genre conventions and certainly is one of Jean Rollin’s most entertaining movies. 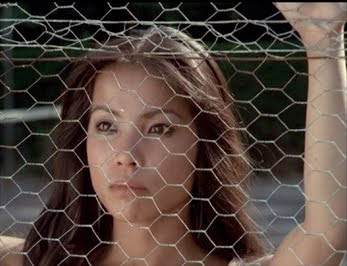 Image:
4:3 full screen
Audio:
Dolby Digital 2.0 Stereo, French dialogue. Optional Swedish, Norwegian, Finnish and Danish subtitles
Extras:
Unfortunately there are no specific extras that relate to the movie, more than trailers for the other Jean Rollin titles and other stuff released by Njuta Films. I hope that they have more Rollin titles for future releases, because this has been one of the most enjoyable series to follow in a long while. 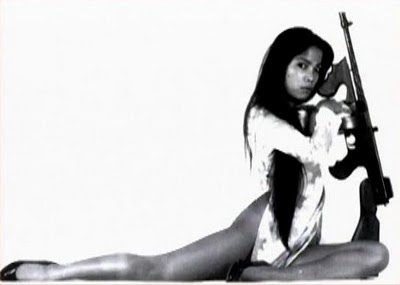 Awesome piece and thanks so much for the link back to Fascination and the nice words. I am glad you enjoyed this film as well and I will include a link back to it over at Fascination. Thanks again!

I have to drop by SubDVD and buy me a copy of this movie. I just thought it was a sexploitation-movie and nothing more, but this seem a lot more interesting than I could ever belive! Great review!

The opening with Rollin gunning that fella down is a superb attention-grabbing device. My main complaint with this film would have to be the framing, which betrays the rushed nature of the production. Just a little more care and this would have been a genuinely good Rollin.
Jess Franco did a similar film bu with much higher budget, called DOWNTOWN HEAT.

Franco did loads of these kinda films. But if i where to go down that road, I'd go as far as saying that this one is better than She Killed in Ecstasy. But you may be right about the framing, and those faulty widescreen specs on the box got my hopes up for nothing. But I'm just guessing that this one was shot in the ratio to match the holiday footage. I did't really pay that much attention to the framing, but I'll take your word on it and keep it in mind the next time I watch it.