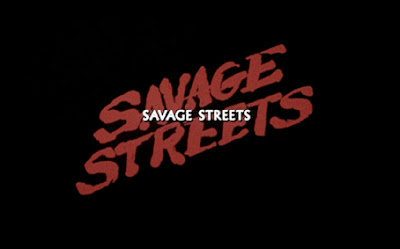 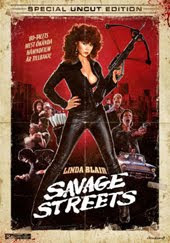 Savage Streets
Directed by: Danny Steinman
USA, 1984
Drama / Revenge, 93min
Distributed by: Studio S Entertainment
This is a splendid example of American exploitation film when it’s at it’s very best. Danny Steinman’s Savage Street isn’t only a trashy rape/revenge flick, but it also has a large heart and plenty of soul as it tells it’s gritty tale of a young female taking vengeance on a world where male dominance and ignorance has gone too far. 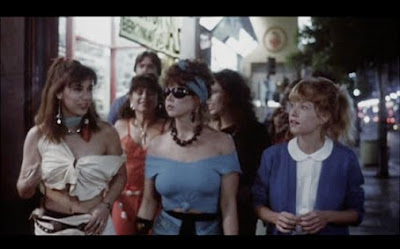 Linda Blair is something of an enigma for me. Sure, she gave a great performance in Fridekin's The Exorcist 1973, for which she as a fourteen year old kid, was nominated for an Academy Award thanks to her spiffy portrayal of Regan – an academy award which she lost to another train wreck kid, Tatum O’Neal in Paper Moon. And earlier that the same year Blair was nominated and won the golden globe for Best supporting actress for The Exorcist. It’s arguably one of her absolute best roles ever, and it’s pretty easy to see the similarities in future roles that she chose to take… the troubled young woman, in some way or another tormented by antagonistic forces. Forces that on screen may have been fictive, but definitely where very factual in real life where she was tormented by drugs, drink and shit management. 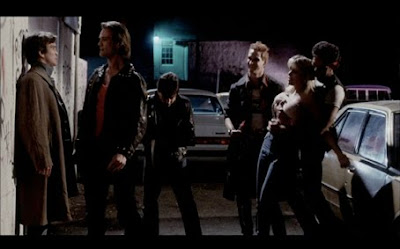 Although there is really no resisting Linda Blair, with her tiny frame, chunky posture and that cherubic face, she will always hold a weird image of innocence. Something that adds to the bizarreness of her parts in violent, fast paced, mean and sleazy action flicks. 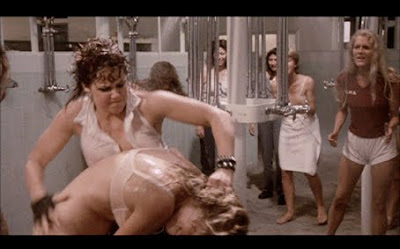 Brenda [Linda Blair] is the leader of a chick gang who spend their time between the torments of high school and partying in the city of L.A. It’s during one of these nights that a harmful prank – stealing the car off a band of punks that almost ran over Brenda’s deaf mute sister Heather [Linnea Quigley] and dumping a load of trash in it –that the band of punks set their vile revenge in action. If an eye for an eye is the reference, then their revenge is an eye for a whole face, as they sadistically drag the mute girl into a gym bathroom and take turns at raping her. Before they leave gang leader Jake [Robert Dryer] leaves her with a ferocious kick to the head that lands her in a coma. The girl gang gathers at the local club where Brenda declares that her life is falling apart now that her beloved sister is in hospital. Obviously the punks also arrive at the club, and after threatening Francine [Lisa Freeman] a huge fight breaks out that ends with Francine slashing Jake across the face with her stiletto knife. Needless to say the punks take revenge and after a shocking death of one of the girl gang, Brenda snap and takes to the streets to take her revenge on the punks and stop their rein of terror once and for all. 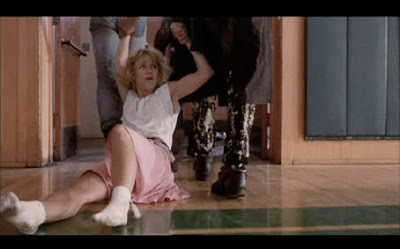 With that quick fix out of the way, it’s pretty fair to say that Savage Streets could have been just like any other rape/revenge flick and simply gone right out for exploitative value and, but it uses a great tool to get under the skin of it’s audience and make a larger impact than it would have done if it just went straight to the dirty deeds. Taking it’s time to set up characters and establish them within their universe is invaluable to a movie like this, which Steinman and Norman Yonemoto (who also participated in the scriptwriting of Chatterbox 1977) obviously knew when getting into this one. 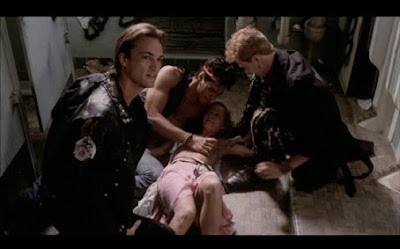 If not for the relationships between Linda Blair, Linnea Quigley and to some extent Lisa Freeman and Cindy [Rebecca Perle] – Blair’s main schoolyard antagonist, Savage Streets could have fell flat on its face and vanished off the scene. But it didn’t, and underneath that cheap, gritty surface, there’s some really effective storytelling going on. And it’s all in the relationship between the three/four girls. They are the characters that will engage us emotionally and also become the cause which Brenda has to react too. There’s a great advantage in taking the time to explain the hierarchy of the girl gang, and their relations to each other. To show the audience that Brenda is the one centrepiece that they all revolve around. This is shown amongst other ways as Francine [Lisa Freeman] confides in Brenda that she isn’t only going to get married to boyfriend Richie [Richard DeHaven], but that she’s pregnant with his child too. It’s a value that Brenda obviously respects and even so the audience. Also to show that apart from being a hard leader of her pack, Brenda is a fairly gentle and loving character to her deaf mute sister Heather. She looks out for her, takes her with her out on the town, and don’t forget that little scene where Heather gives Brenda a heart locket and they tell each other how much they love each other. It all becomes emotional fuel that is ignited when the few items of positive value in Brenda’s life are threatened or taken away. It is for them that she straps on the crossbow and goes on a crusade against the world. 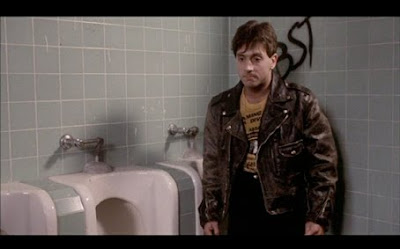 But also there’s a rather fascinating character in Vince [Johnny Venocur] the young man who wants’ so badly to be accepted by the punk gang that he’s easily manipulated into doing deeds he certainly wouldn’t have with out their influence. The punk gang obviously representing a symbol of independence, a symbol of going against the adult world is exactly what Vince is looking for in his state of late adolescence. A release valve through which he can become an independent adult. The rape of Heather becomes his initiation into the punk gang, but it is in no way an acceptance of the group, as he never really is let into the gang and is still their object of inner torment. It’s easy to see a situation where Vince would have become the fall guy for the rape if things had taken that path. It’s also a remarkable situation, as it is also following the rape that he starts to question the moral values of the punk band. 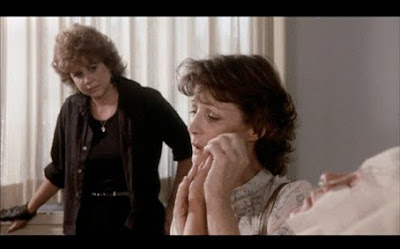 Like many other great coming of age movies – as that is really what Vince character arc is all about, coming of age – the object of desire, independency wasn’t really worth the fight, and you can imagine Vince crawling up next to his father and bawling his eyes out after Brenda slaps him around just before the final confrontation with the gang. Vince has made a enormous journey, from schoolyard runt, to member of The Scars only to realise that this was not what he really wanted at all, and after objecting to Jake’s murder, he realises that he wants’ out, and this also brings him the insight that he’s done wrong. He saves himself by begging Heather for forgiveness and later selling out the gang when he tells Brenda of their secret hideaway… only to be punished by gang leader Jake and that big ass car. It’s a great character that could have been fleshed out so that there at least was one more character to sympathise with as the ending comes. 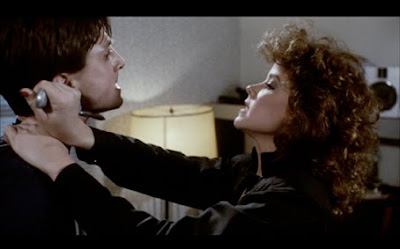 But that’s really not what Savage Streets is about. I chose to look at it as being a movie about feminism, giving women the power to strike back, and strike hard, so hard that they break the mother of all taboo’s along the way – murder. Strong female characters finally get to suit up Rambo-style (watch the movie and you’ll see what I mean with that), and go out on a full-fledged Death Wish style revenge rampage. Even though Blair may have looked a hot mess in the movie, she certainly makes an impression and get’s the job done. Reconnecting to that comment earlier that she looks like the face of innocence, - when you finally buy into her as the leader of the pack, the full transformation makes a pretty interesting avenger of that once innocent little child who at least visually returns to being a little child at the end of the movie. 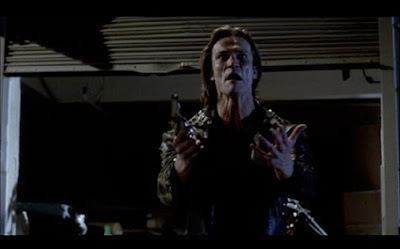 Sure the acting is pretty bad, the story is pretty pale and shallow - apart from those few characters that give us something of value, and something to hang onto emotionally, because that’s what all good film is about, if your audience can’t cling onto the characters, then it’s going to be lost on them. But Savage Streets certainly is grim, grim in a sadistic level that certainly is relevant to teenagers and the whole emancipation from the adult world thing, where you can trust no one and no one will pay you any attention… unless it’s from a negative standing point. Just like John Vernon’s sardonic principal. A principal that doesn’t really make much of an effort to take any responsibility for the horrific rape of Heather which took place at his school – a place for which he is outmost responsible. So it’s no wonder that the kids have no respect for the adults of the Savage Streets universe, as they don’t either take any responsibility… 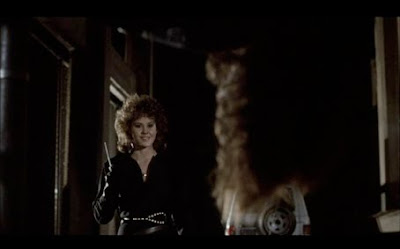 Musically it would be easy to say that the soundtrack sucks, but considering the timeframe of the movie – early eighties – it get’s the job done. Although I would have considered using more rock or punk, as that’s what The Scars are supposed to be, instead of the post new wave pseudo pop rock stuff that’s in there. Then again Australian singer songwriter John Farnham who wrote and performed most of the tracks on the soundtrack, did get a single out of the album – Justice for One, and even though it never made an imprint on the charts Farnham would two years later have a world wide hit on his hands as the Whispering Jack album featured the global hit “You’re The Voice”… yeah try to pretend that you don’t remember that one. And on music, at one point in time, Runways lead singer Cherie Currie was supposed to step into the role as Brenda. 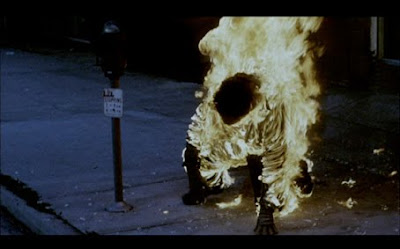 Savage Streets is a neat little exploitation movie indeed. It simply oozes the eighties; in a way it’s the alternative coming of age flick in contrast to all those John Hughes movies. But instead of moping around for lack of love, teenage angst and broken hearts, this one channels on the hate, magnifies the frustration and builds up to that revenge climax in all the right ways.

One final question though – Whatever happened to Linnea Quigley in the year between Savage Streets and Dan O’Bannon’s magnificent Return of the Living Dead 1985? There’s certainly not much in the seductive Trash that is reminiscent of the innocent Heather… so what happened… 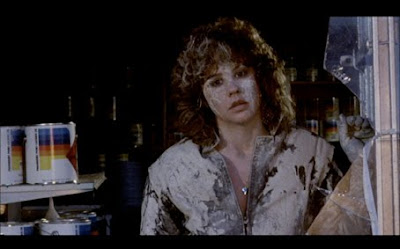