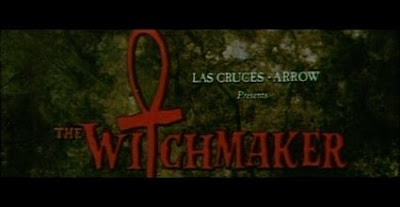 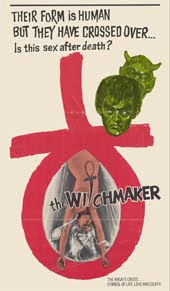 William O Brown who only ever directed two features and later wrote a book on the subject – Low Budget Features, made his movies and then vanished from the scene never to be heard of again… but he left us with a very impressive movie; The Witchmaker definitely one of the lost classics of American Independent Horror. 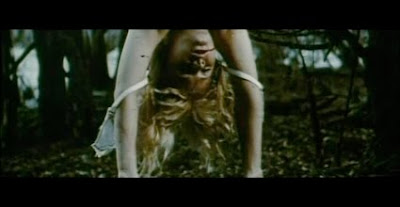 The tone is set instantly as a woman bathing in the everglades climbs out of the water, wriggles into her clothes only to be stabbed down, have a symbolic sign etched into her white flesh, hung upside down and bled like a pig whilst a manic man laughingly goes about his dirty task. The man is Luther the Berserk [John Lodge – who also starred as a Russian Agent in Gordon Douglas’ James Coburn super spy spoof sequel In like Flint 1967], and the poor woman is his eighth victim in two years. Roll credits… Dr. Hayes [Alvy Moore, a good old classic character actor, who also made a brief appearance as one of the elderly cops that answer the initial call to the police in Scott Spiegel’s Intruder 1989, and associate producer on The Witchmaker] and his team of paranormal scientists are taken out to the swamps by guide Leblanc [Burt Mustin] who takes them to their drop off and warns them against trying to leave the Swamp by their own hand, as "There’s nuthin’ but gaters, moccasins and quicksand” out there. The boat ride not only establishes the dangers of the nature setting – the swamp – but also is used to explain the rules of The Witchmaker universe, how the witch mythos works and by which set of laws they work. It also presents characters such as Dr. Hayes most loyal assistant Maggie [Shelby Grant who starred against James Coburn in the original Our Man Flint 1966], young students Owen [Tony Benson] and Sharon [Robyn Millan]. Then there’s the key players, the sceptic Journalist Victor Gordon [Anthony Eisley from Al Adamson’s Dracula Vs. Frankenstein 1971, Ted V. Mikel’s The Doll Squad 1973 and the brilliant Samuel Fuller’s The Naked Kiss 1964], and then there’s finally his love interest – yeah you got to have one of them to make your hero character take to arms - the “sensitive” Anastasia [Thordis Brandt] Brandt who not only had a minor role in William Wyler’s Funny Girl 1968 as one of the Ziegfried girls, but also starred as one of the Amazons in… Gordon Douglas In Like Flint. Brandt was once the long time girlfriend of James Arness, and after retiring from acting she returned to her original profession as a nurse. "Sensitive" being their word for emotionally frail psychic – think Pamela Franklin’s Florence Tanner in Legend of Hell House or Julie Harris’ Eleanor in The Haunting. 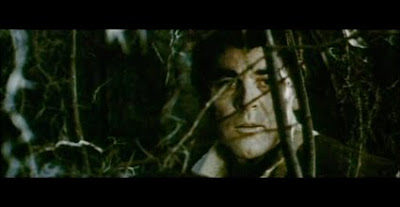 So this bunch of scientists arrive at the house in the swamp where they aim to conduct their research and experiments – much to Vic’s questioning, after all is it right to bring women to a place where eight other females have been murdered? Dr. Hayes, Owen and Vic prep for the session to take place later that night, and the chicks – Sharon and Anastasia –whip out their bikinis and start to lap up some sun. Just beyond them, in the shade of the woods lurks Luther who simply can’t take his eyes off Anastasia works some good old black magic on her that has her running off screaming through the swamp in slow motion whilst Luther satisfied goes back to his cave and prays to his lord Satan. At the same time he summons up the old witch Josie [Helene Winston] who claims that with the initial spell cast, she can control Anastasia who Luther wants for his coven. 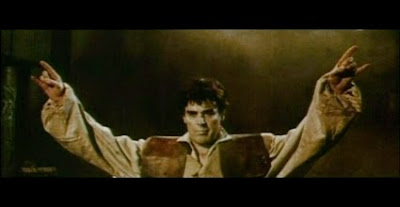 Then stuff really starts to take off, Luther and Josie take power over Anastasia, who lures young Sharon out to the swamp where Luther, just like in that opening sequence, jumps her and steals her away. The blood is offered up to Josie, who drinks it and rejuvenates into an embodiment of her younger self played by Warrene Ott from here on. Ott, who starred in T.L.P. Swicegood’s hilarious pre-splatter fest The Undertaker and His Pals 1966. Young Owen is designated guard after the team of scientists bury the remains of Sharon, and Anastasia doesn’t waste any time in her seduction of him. He willingly follows her into the murky woodlands and in a superbly light scene Josie is awaiting him with a big ritualistic dagger! 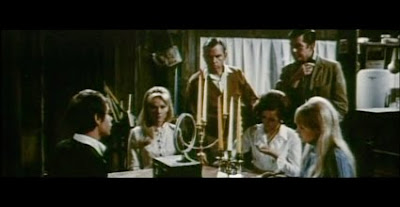 With two of the team dead, Dr Hayes, Maggie and Vic, now less of a sceptic than earlier, confront Anastasia whilst she is under sedation. She summons Luther, and Vic get’s right into a fight with him. Then a blast of thunder and lightning reveal that it’s not Luther, but the body of Owen that Vic is fighting with! Ultimately the movie moves into it’s last act and the research team plan how can they take out the vile Satanist Luther and save Anastasia at the same time that Luther summons up the rest of his coven cultists – more playboy playmates amongst them – and have Anastasia go through the final ordeal, make her pledge and become one of the thirteen of the faithful. So in the end it’s all comes down to that age-old battle Good versus Evil - but not before Luther has a feast with his coven. 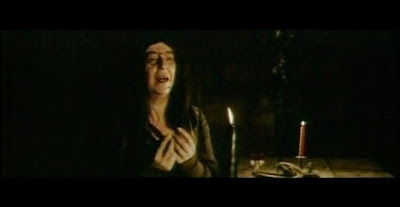 Rather low on the classic low budget, grindhouse traits of fast action, spontaneous nudity and gratuitous violence, the main ingredient to The Witchmaker is atmosphere, and it holds an atmosphere so rich that it could be sliced and put on a sandwich. Not to say that the movie is completely lacking pacing, nudity and violence, because it does have all those traits even if the sex and violence is pretty sparse... although there are three Playboy Playmates amongst the cast. But the controlled approach to the themes actually works in favour of the movie. I have always said that showing less is more in certain cases, and as the restriction is continuous throughout the movie it works for the narrative of The Witchmaker in a great way. Much of the atmosphere comes thanks to the location – Marksville, Louisiana, and cinematographer John Arthur Morrill’s at times superb camerawork and lighting. Morrill ended his career shooting several movies for B-movie legend John “Bud “Carlos. 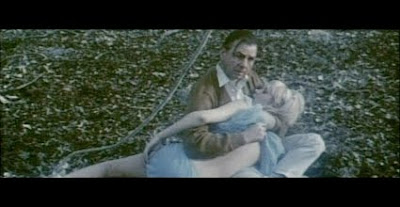 And there’s a reason why movies like John Hough’s The Legend of Hell House 1973 and Robert Wise masterpiece The Haunting 1963 come to mind, as they too play off the same theme of a Parapsychology investigation that takes a turn for the worst and sets the crispy academics up against the real deal. There’s also a splendid feeling of Hammer/Amicus/Tigon vibe throughout the movie that definitely helps the movie along. Not forgetting that pretty eerie soundtrack by Jamie Mendoza-Nava. 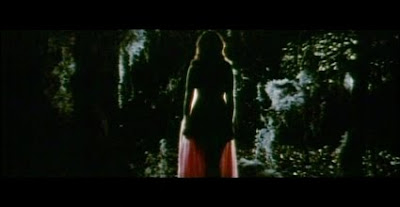 The Witchmaker script originates from L.Q. Jones - Justus Ellis McQueen Jr the American character actor who starred in several of Sam Peckinpah’s movies and also directed a bunch of low budget flicks like A Boy and His Dog 1971 and The Devil’s Bedroom 1964, and The Witchmaker on which he was executive producer. Holding a fascination for the occult and witchcraft and at the time weary of acting within the system, Jones decided to focus more on producing his own self financed movies instead. So he started outlining a story that later would be completed by Brown as The Witchmaker. But the real enigma here is that of director William O. Brown. There’s almost nothing to be found on the guy if you where to go searching for information on him, apart from his two Producer/director credits on The Witchmaker and the earlier One Way Wahini, a comedy from 1965 and the before mentioned book on low budget filmmaking. For a guy with so little on his public resume, Brown certainly is an intriguing character. And the screenplay to The Witchmaker is very satisfying. 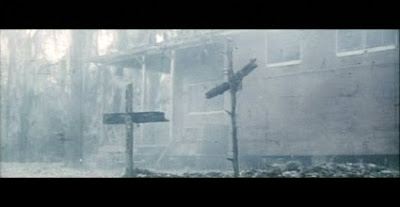 There’s interesting complexity to several characters – Vic the sceptic, Anastasia who is confused by her two states of being, Dr. Hayes who knows that he’s ultimately responsible for the deaths. There’s also a fine balance between action and exposition, it would have been easy to just chuck stuff in there, but Brown takes his time to establish and set up characters and explain the rules so that we understand what is happening and where it’s all leading – well enough to keep it intriguing at least And there’s a final surprise twist in the finale that is rather unexpected when it looks as if everything is cleared up and back to normal again. It’s an impressive and smart little movie that really hold up well even with today’s’ standards 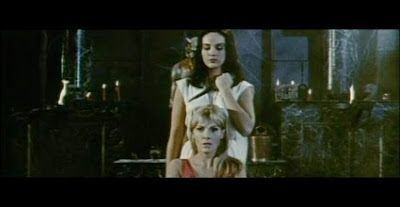 Even though The Witchmaker was made as an independent feature, it was eventually picked up by Excelsior Pictures – a division of United Artists through which they distributed their low budget, semi grindhouse titles – and was rolled up on 63 Southern California drive in theatres during the summer of 1969. It did pretty well and just like the great irony of early independent filmmaking, it made a few bucks for the owners of the film and not a lot for the actual filmmakers. After that initial run the movie, like so many others, The Witchmaker faded away and was rarely mentioned ever again. 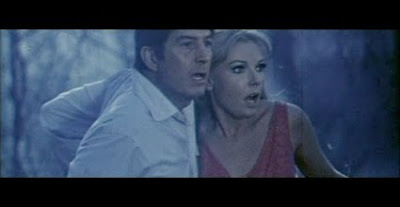 Still to this day there is no "official" company bullshit release of William O. Brown’s impressive lost gem The Witchmaker. Which is why the Midnight Video Special Edition is the only real way to see an official version this movie in all its fascinating glory. And you should see it because it is a very entertaining piece that for some reason went missing from the conscious mind of genre fans. A sad loss of a piece that is very high on atmosphere, tells a great story and is a damned fine movie indeed, well worthy of a rediscovery. 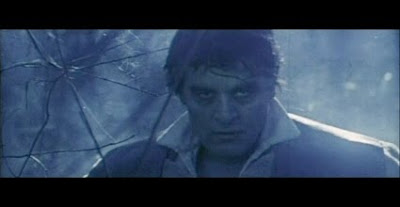 Famous is good. I guess you could say famous for releasing the most complete versions of movies that where hacked to bits in the US. As soon as anyone could up a better or like worthy version they used to take theirs off the market. No real problems there. All in line with the public domain laws of America.

God knows that a lot of wouldn't have seen half the stiff we've seen without people like Midnight. At least they gave a damn about quality, and didn't just flog umpteenth generation dupes.

I didn't mean anything bad with it. Just stating a fact.

I have bootlegs myself.

I didn't read you as meaning anything bad either brother! I'm just as guilty as you are if push comes to shove... but probably much more when I think about it... which is probably why I got al defensyspency