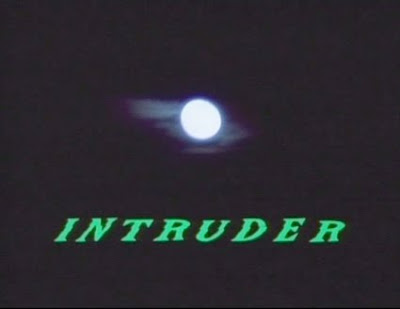 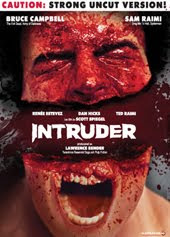 Nostalgia is a pretty powerful word. The correct sense it’s meaning is : Nostalghia: 1. Sentimental yearning for the past. 2. Homesickness [from the Greek nostos – return home + algos pain]
There is unavoidably a certain amount of nostalgia connected to certain movies – such as the old school splatter movies – movies like Dawn of the Dead 1978, Evil Dead 1981, Evil Dead2 1987, Re-animator 198, From Beyond 1986, Hellraiser 1987, Day of the Dead 1985, Maniac 1980, Bad Taste 1987, and many more. There's a reason why it's referred to as the golden age isn't there... These movies punched the collective horror audience hard in the face, rammed it’s fist down our throats and pulled our guts out of our mouths. These movies showcased devastating scenes of death and carnage in the most realistic and blood drenched fashion unlike anything that we had seen before. Gone where the cheesy but ever so atmospherically haunted house with their moonlit cobwebs swaying in the wind, and instead there was a blood lust so ferocious that audiences where shocked into submission and addiction…
…an addiction that never really went away. 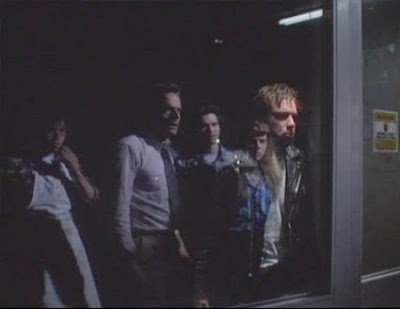 Those movies take me back to the days of competing with mates for who could come up with the most violent, shocking and provoking titles, and watching them in a pack like animals squatted in my first apartment that I shared with a mate from school. There was something extremely potent with that milieu, gathered round that 14”TV. There were no widescreen; surround sound bollocks back then, and no desire for crystal clear BluRay prints. It was all about freaking each other out and tormenting the crap out of who ever flinched during the exposition of hardcore violence on screen. What once was a form of initiation rite is now a secure source of escapism. A chance to unplug the responsibilities of being an adult and kick back to a goofy shock fest and hopefully evoke a few scares, gasps or laughs. 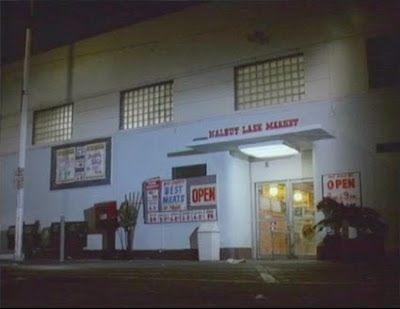 One of the movies I saw during this time was Scott Spiegel’s Intruder. A movie that by reputation made it seem like the Citizen Kane 1941 of splatter flicks, a movie that supposedly had such startling special effects that it would blow your mind. Well that was pretty much the same reputation that all these flicks had before the play button was finally hit and the show got on the road. And the last movie seen was pretty much always the Citizen Kane of splatter flicks and had the most mind-blowing special effects. 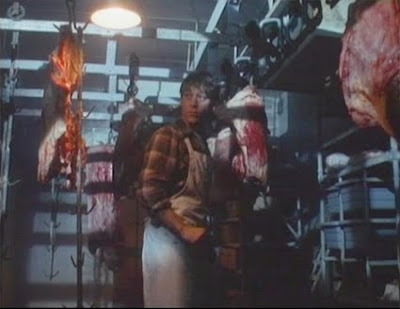 Intruder does have a couple of really far out effects and it is a prety generic splatter movie, , but in later years I’ve begun to look at Intruder as the tragic story of the underdog director and the successful producer... a story that proves that Hollywood is a bastard to conquer even if you have some great stories to tell. 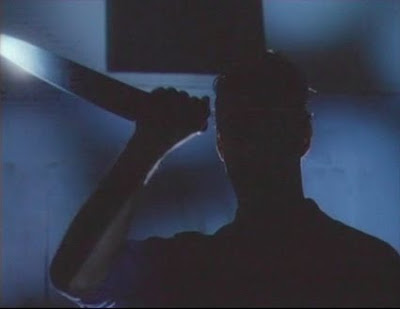 For some reason director Scott Spiegel, just can’t get a break. He’s still waiting for that one project that will bust the frame and launch his career into the major league. It’s odd that it hasn’t yet happened as he has been surrounded with big time genre names since he was a young man. He went to school with Sam Raimi, with whom he later shared a flat. In the same flat there was also the Coen brothers, actresses Kathy Bates, Frances McDormand and Holly Hunter. Spiegel’s been active in the movie making business since the early eighties, both as director, screenwriter, producer and actor but still has that big break to come. But that doesn’t mean that he’s not a familiar name to fans of hardened horror, he wrote the screenplay to Sam Raimi’s Evil Dead 2 1987 – which storytelling guru Robert McKee calls the greatest horror movie of all time – he wrote and directed Intruder - which any self respecting fan of horror has seen at least twice, he served as executive producer on both of Eli Roth’s successful Hostel films, but compared to his buddies in the same sphere he still has a far way to go. He’s a classic underdog struggling for recognition. 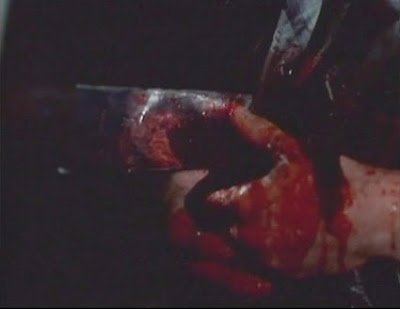 Now place that next to the producer and co-writer on Intruder, the young Laurence Bender... does the name sound familiar? Well after working as a grip on a few episodes of Tales from the Darkside, Bender tried his skills at producing, and what better than the movie that he and mate Spiegel had written - Night Crew. The movie was later renamed Intruder to ease into the same mould of titles that many of the movies in that niche had gone before. Just three years later Bender would produce a movie for a young energetic director that Spiegel had introduced Bender to at one point in time, and this was of course Quentin Tarantino. The movie Reservoir Dogs 1992, and Tarantino and Bender quickly became the leading names in contemporary American movie making. Bender has since produced every single one of Tarantino’s flicks except Death Proof 2007 – which many claim to be the weakest of Q.T.’s flicks. 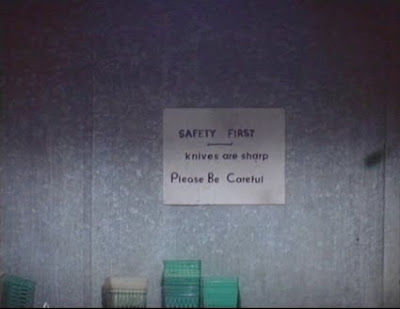 Intruder is a splendid example of the golden age of splatter film. Very low on story – but high on cliché’, shock tactics and excellent old school special effects supplied by Robert Kurtzman, Howard Berger and Greg Nicotero, who have done the effects on almost every American movie that made you go Whoa! in the last three decades. And it’s Nicotero who’s in charge of the effects in what is my most anticipated serial this year – Frank Darabont’s adaptation of Robert Kirkman’s brilliant The Walking Dead. Anyways, Intruder tells the tale of a bunch of kids who all work at a Walnut Lake Market where an initial confrontation between Jennifer [Elisabeth Cox] and her ex. Craig [David Byrnes] who turns up and threatens her sets a threatening tone that will seep through the rest of the movie. They throw Craig out of the store and as they are shut inside the store waiting for the squad car promised to arrive, managers Bill [Dan Hicks – Jake in Evil Dead 2] and Danny [Eugene Robert Glazer] ask them all to stay behind and down mark all the goods in the store as they have decided to sell the shop. The kids all moan and mope, but soon get to work – Renée Estevez (sister of Charlie Sheen and Emilio Estevez and later a regular on West Wing), Sam and Ted Raimi amongst them, and also cameo’s by Spiegel, Bender and Bruce Campbell – and as they go about their tasks, surprise, surprise there’s a killer amongst them. Going by the book the audience is invited into a simple but entertaining challenge to figure out who the killer is amongst the ensemble as they one by one, meet grim and horrendous fates. It doesn’t have to get any more complicated than that. Set it up, present the gallery of characters, pose a threat start slapping down the red herrings and let the bloodshed begin. 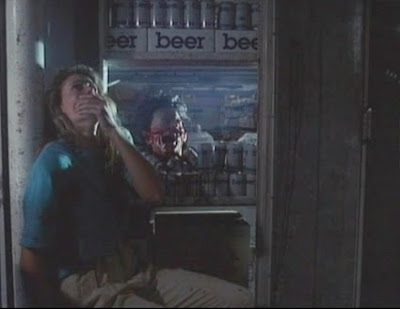 Sure, it takes a while to build up until the shit kicks in, but there’s several effective scares until it get’s going for real, some further establishing of the characters a few gags which definitely show that Spiegel wrote that Evil Dead 2 script as the most of them hold a lot of the three stooges comedy that one associates with Sam Raimi’s movies. There’s several amusing little Argentoesque nods with sometimes corny but in line with the tone of the movie POV’s: inside a shopping cart, from air vents and the keypad of a telephone to name a few which may have been suggested by Spanish cinematographer Fernando Argüelles, or simply as a homage to those great visuals that Argento movies commonly serve up. Like a lot of the grand movies in the sub genre, Intruder also has a brilliant creepy minimalistic electro score that fits like a glove.
Intruder is still a great old school splatter flick. It’s a nostalgic rollercoaster ride, it’s grim, it’s evil, it’s sinister and it’s still a whole lot of gore-drenched fun, which ends with a last shocking twist. 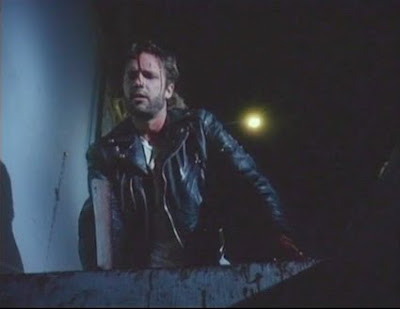